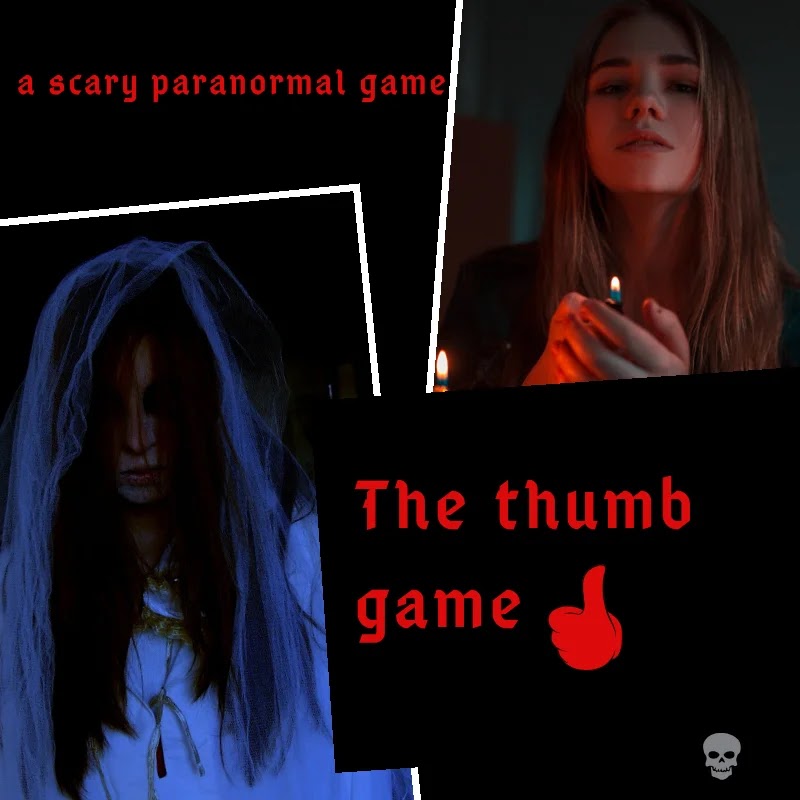 The list of paranormal games are too long,some are very common to most of the scare lovers like the closet game and the baby blue, on the other hand some are very uncommon like the thumb game.This game still holds equal fear as compared to the others evil games avilable on the internet.

Contents hide
1 what is the thumb game?
2 How to play the thumb game:Scary rules and rituals
2.1 Safety notes for the tumb game
2.2 RISK LEVEL IS HIGH
2.3 Story behind of thumb game
2.4 Reason for not working of the thumb game:
2.4.1 Frequently asked question
2.5 Conclusion:

what is the thumb game?

This game is all about having a wish granted from a evil soul if you are able to find her lost thumb,in a creepy villa( by performing a spooky ritual) under the time period of a candle until it blow out.If you win, your will a wish granted,if you lose you are dead.
The thumb game or we can say ” Oyayubi Sagashi ”  Its probably misspelled as “tumb game”ok let’s talk about this game and the story behind of this scary game.
As you know most of paranormal games based on urban legends . This game also based on another urban legend,but Japanese urban legend. That’s why this game is so risky
A young woman story who died , a wish will be granted to that particular person who finds her thumb . Sometimes the game is also called ” Looking thumb “.Let get straight into  the rules and rituals of the thumb game.

How to play the thumb game:Scary rules and rituals

Every paranormal game comes with come evil rituals and rules, so as the thumb game or tumb game.Let get into the creepy rituals now,
Number of players: You will need minimum 3 players, to play this game.
step 01 – form a circle sitting on the ground and you have to grab the left thumb of the person on your right. And the player on your leftside have to hold the thumb of your left hand.
Step 02 – all should keep their eyes close and have to assume that they are in the villa where the young women was murdered. You must do this game seriously otherwise this game won’t work.
While this step do not open your eyes
Step 03 – say these following sentences twice.
” Oyayubi , Oyayubi , hear our voices “
” Oyayubi , Oyayubi , grant our wish “
Then you will be transported to a room you have never seen before. Strange room and it’s western type villa
But there is one solitary candle in the room.
Step 04 – Now you must begin searching for thumb as soon as possible. You just have your time until the candle blow off.
Step 05 – If your are willing to get out from the scary villa then you have to blow off the candle.
Note : when you are  in villa searching for the thumb, you may find someone tapped you twice on your shoulder but its highly recommended,not to turn behind  . Or else you will loose your life in the villa.
If you get the thumb, grab it tightly in your hand then blow off  the candle, you will return back to your place and your wish will be granted and the game successfully completed.

You may like to read,the rituals of a closet game

Safety notes for the tumb game

• While you playing this game do not ever let go of anyone’s thumb
– because that person will lose the thumb
• Please during this game do not open your eyes
• Do not look behind you
– You will die
• Do not ever allow the candle to burn out , If it does  you will be stuck in the villa forever.
You should blow out the candle to end this creepy game.

DO NOT EVER PLAY THIS GAME WITHOUT MEMORIZING THE RULES AND OTHER THINGS THAT I HAVE MENTIONED IN THIS ARTICLE
ONE MISTAKE WILL CERTIFY YOUR DEATH
NOTE : I AM POSTING THIS ARTICLE FOR PEOPLE WHO HAVING INTERESTING ON PARANORMAL THINGS. IF YOU CHOOSE TO ANY OF THESE GAMES THEN YOU DO IT YOUR OWN RISK.
I RECOMMEND YOU TO DO NOT PLAY THIS GAME

Story behind of  thumb game

• This game based on Japanese urban legend we called it Oyayubi Sagashi. The story about 20 years old young woman who was murdered by unknown person.
• people found her body parts around the villa but no one could find her left thumb.
• In this game you have to find her thumb and if u can find her thumb and if uh successful done this game you will be granted a wish.
I will give u some steps but you should memorize because if u made any mistakes while playing this game it’s very dangerous it will cost your life.
For this game at least you need three people
Some version of this game that the murderer who killed that young woman still in somewhere in the villa when you arrive there remember the long you spend playing game the more at risk you are of him or her finding you.

Reason for not working of the thumb game:

Many fear lovers over the internet had already tried this games and calls it fake or complain of it as not working, but there can be few factors behind this cause, like:

1. What are the  scariest game to play?
Ans: List of other scary games are(we don’t recommend)

2.what are the possible thumb game experience?

Ans: Experience possibly vary from person to person, the fear factor of the environment, How successful the individual was playing that game, etc. We have found both positive and negative responses, aw well.
3.Can you play thumb game in school?
Ans: Well, possibly you need a silent scary room, which I guess wont be available in your school. Moreover the game rituals can only be performed in the dark.
4.Who is Oyayubi Sagashi?
Ans: Oyayubi Sagashi was an  20 year old woman who was brutally murdered, her body was discovered by the cops except her thumb.

Though the rituals of the thumb game,doesnot seems too scary, but the game itself can even lead you death.So,its highly recommended not to try it yourself,if you do, we are not responsible for any mishappenings.Just read about the game,enjoy the scare in it,thats it.Donot get hunted in return of a wish.
# the thumb game